When husband and wife Rodolfo Alvarez and Anna Muller moved to Tottenham five years ago they fell in love with their local green space, the historic Bruce Castle Park — so much so, that when they saw it was becoming increasing dilapidated they decided to do something about it. Now their monthly litter picks are going from strength to strength, fuelled by new friendships and their own mini bake-off!

Bruce Castle Park is an important community resource in an area of Tottenham that, like much of London, is home to a broad mix of poorer and more affluent families and where outdoor space is precious. It boasts a museum set in a Grade 1 listed 16th century manor house, a 400 year-old oak tree, a paddling pool, a sports club and a café. It’s very popular and many local residents see it as an extension of their own gardens, but despite offering so much, it’s becoming tatty and run down and rubbish is an issue.

‘We felt the park wasn’t getting the love and care it deserved, so we decided to take responsibility and change that,’ says Anna. With her husband Rodolfo and other local volunteers she set up the Friends of Bruce Castle Park in April 2016 to make improvements. Their first act was to survey park users, to find out why they visited and what they liked and disliked. While most people came to enjoy the nature and history of the park, the strongest dislike by far was the amount of litter. Tackling this was the obvious place to start.

It was Haringey councillor Peray Ahmet who suggested they got in touch with Sarah Hayes from CleanupUK. ‘Sarah was so helpful,’ says Anna, ‘providing advice, all our litter picking equipment and high viz vests, as well as helping us to promote our events.’

They joined CleanupUK’s Beautiful Boroughs Project in September 2016 and have held successful monthly litter picks ever since. The number of litter pickers is steadily growing with new people taking part. So what’s Anna’s advice to groups wanting to do something similar? “Be patient and persist, even if you only get a few people coming at the start. And, make it a regular date, so it’s easier for people to remember.”

In just ten events the group has cleared an impressive 108 bags of rubbish including microwaves, mattresses and carpets. But the biggest benefit according to Anna is the social and community aspect. She says, “Don’t be afraid to talk to park users as you litter pick; don’t prejudge them, engage with them. We’ve found they’re almost all very supportive about what we’re doing. It often makes them think – if we’re looking after the park, they can too.”

And she adds, on a more personal note, ‘it’s really satisfying doing something positive. The best thing is getting to know people, working with them for the benefit of all. I’ve made some really good friends.’ Anna has also made some really good cakes, setting up an informal cake competition within the group to treat the litter pickers after each event. “We’ve had Swiss chocolate cake, blueberry muffins, German cheesecake, banana loaf… The only trouble is they all taste so good we can never decide who the winner is!”

Friends of Bruce Castle Park meet to clean up at 2pm at the Pavilion on the first Sunday of every month. New people are always welcome. You might even get a slice of cake.
Visit www.friendsofbrucecastlepark.org.uk for more info. 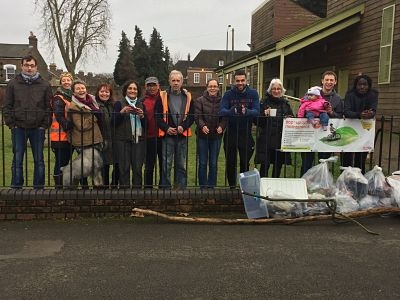