You know the old joke ‘There’s no ‘I’ in team, but there is a ‘me’’? Well, it’s fair to say that in Hales Gardens, while her neighbours chip in and Yvonne Price from CleanupUK offers invaluable support, there’d be no ‘Love where you live’ team without Linda Hackett. She’s a one-woman phenomenon, who uses her dedication and charm to change her local streets for the better.

Kingstanding is a suburban area in North Birmingham much like many others across the country. Covered in council estates, there are realms of red brick houses, a rabbit warren of alleyways, limited local shops and fast food aplenty. While it’s by no means the most deprived area in the country — or indeed Birmingham — lack of investment has left pockets of it looking unloved, a bit stark and definitely litter-strewn and unwelcoming.

Many local people feel that it’s up to council to sort it out, but cutbacks have made it increasingly unlikely that fixing fences, or a lick of paint, will make it up the priority list for many years to come. Most people become resigned to their surroundings. But Linda Hackett isn’t most people.

“Hales is a nice area, but needs regenerating, a bit of TLC to make it warm and welcoming. It’s not always up to the council, some people think it’s always someone else’s problem, they pay their tax…but tax has to pay for children and older people first. There’s not enough money, so we have to do it ourselves.”

She has transformed her quiet cul-de-sac in Hales Gardens, in particular its central island, from a litter strewn eyesore into an attractive space for residents to enjoy and children to play in — bringing her neighbourhood closer together in the process.

The ‘island’ is a kidney-shaped grass roundabout with four trees. Neglected and shabby, people had no qualms about parking on it and Linda hated looking out of her window at rubbish, fly tipping and cars. When residents complained it was a mess, the council tried to pave it over but Linda stepped in to save it, literally blocking the diggers’ path. She knew that if she wanted to preserve this small patch of green for the community, she’d have to do something about it herself.

Now retired, but with energy and enthusiasm in spades, Linda has lived in the area for over 40 years. She has always been community-minded and credits her skills in persuasion and getting on with people to working in her family’s shop. It taught her to talk to people and to really listen. She’s always loved nature, the environment and gardening – her mother was a keen gardener and her daughter now does it professionally. Linda cares deeply about her neighbourhood and the welfare of local children.

Tackling the litter problem was a key part of Linda’s agenda to make the area look better, so she was delighted to get support from CleanupUK. ‘Love where you live’ held its first litter pick in May 2018, but after extensive leafleting only a couple of people came out to help. Despite attracting only two or three regular members, the group has carried out 15 litter picks and cleared 158 bags of rubbish, so far.

The support of CleanupUK has been instrumental in Linda’s regeneration plans. When Linda met Yvonne Price, Project Coordinator, Beautiful Birmingham Project, they hit it off right away. Yvonne supplied the leaflets, equipment and arranged for the collected rubbish to be taken away quickly — with thanks to the support of the brilliant Birmingham City Councillors Mohamed Qudeer and Mohammed Tanveer.

Yvonne attends as many litter picks as she can and helps Linda to cut back the thorny bushes in the alleyways that are a magnet for chip paper and curry boxes. “Why don’t people just take them home ?” asks Linda, baffled.

So why won’t more neighbours join in?

Linda believes that often people are a bit shy or lack confidence. They like the idea, but don’t want to commit. Or they simply think it’s the council’s job. However, many neighbours now do help in their own way, by taking the time to keep their gardens tidy, joining Neighbourhood Watch or Fix My Street, or offering support without the formality of being part of a ‘community group’. Perhaps, that’s even better progress? By following Linda’s example they are slowly, without thinking about it, becoming more active members of their community. 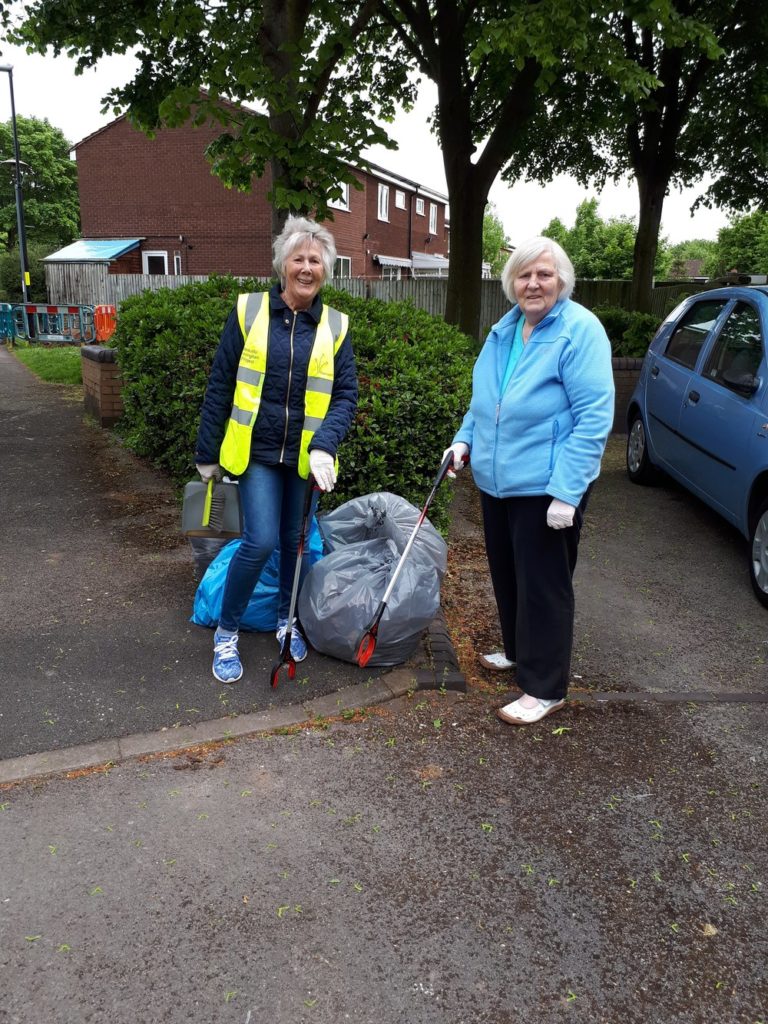