Teenagers are often a tricky group to engage with litter picking, but as this dance troupe proved, once they take ownership of their local spaces they’re a tough act to follow.

In the centre of the London borough of Barking and Dagenham, midway between the flyover and the railway line, you’ll find the Barking Corps, one of the oldest Salvation Army churches in the world. Under the leadership of Major Nigel Schultz, this church has placed itself at the heart of its multicultural local community, opening its doors to all and offering a wide range of classes and social groups.

One of the most popular is the Konverse Dance Academy. The brainchild of CiiCii Mavusi Matu, this street dance group with classes for children between four and 17 was set up in 2012. It was a great success and when CiiCii left for university her sister Elvire took over as dance teacher and currently coaches up to 60 children a week. As the name suggests, Konverse Elite is their most experienced dance group, made up of 10 teenagers aged 13-17 who perform impressively fierce hip hop inspired urban dance routines at community events in the area.

“Teenagers are used to feeling judged, this made them feel part of the community and they loved that.”

This age group often presents a bit of a challenge to CleanupUK – teens can be less than enthusiastic about litter picking. But it’s a challenge Neeta Kanagaratnam, Project Coordinator, is keen to tackle. “I was inspired by hearing Streets Alive Director Chris Gittins’s talk about people needing to feel they could make the spaces around them their own. Take ownership.” she says.

With that in mind, she approached the Barking Corp’s Finance and Youth Programme Administrator, Christabel Juguilon with the idea of doing an event with Konverse Elite. Their conversation led to one of the most unique approaches to litter picking CleanupUK has seen so far – a combined clean up and dance.

Christabel says, “Street dancing was originally performed on the streets and so there’s a connection. It makes sense to clear up spaces around you, make them safe and clean, so you can actually use them.” Like many young people, the girls had grown up in an area blighted by rubbish and had not really thought about it. ‘They’re so used to litter they don’t even see it’ say Neeta. But they embraced the chance to make a difference.

The girls litter picked before performing their best routines on the newly tidy green in front of the blocks of flats and at the local car wash. “People were whooping and clapping over the performance, but also thanking the girls for clearing up. Teenagers are used to feeling judged, this made them feel part of the community and they loved that,” Neeta continues.

Christabel was so passionate about the event, she quickly created a video that has been viewed by hundreds of people online. ‘The girls found it really fun’ she says, ‘they now do a small litter pick around the church almost every week after rehearsals.’ And the girls enjoyed the experience so much they also take part in the Barking Corps’ regular monthly litter picks. ‘Now they’ve seen the positive change that they can make to their environment they’ll never drop litter themselves. They lead by example, inspiring others around them to make the local area cleaner, safer and more friendly.’ Neeta concludes. 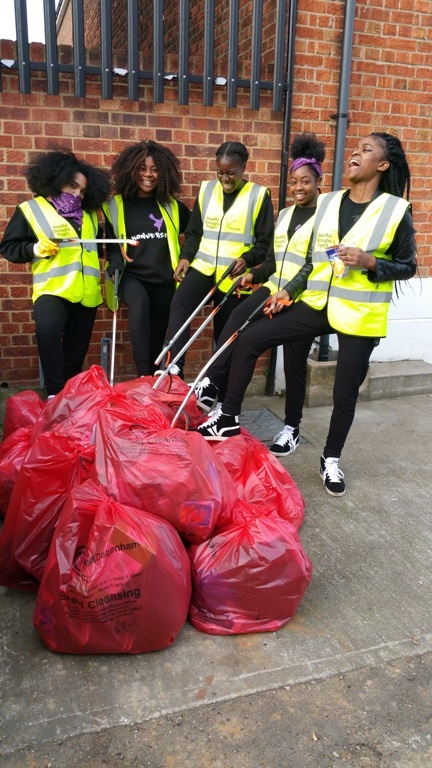