“Why would people litter their surroundings? I don’t understand. Someone will park and shove their litter out of the car. They think ‘I pay council tax, so I can litter’ – it’s unbelievable.”

Describing herself as ‘agitated by rubbish’, Tamara Sulkiewicz doesn’t just detest litter, she finds the concept of dropping rubbish and expecting other people to deal with it bewildering. But she understands human nature enough to realise that it takes time and perseverance for people to change their habits.  And that, if she wants change, it’s up to her to lead the way.

Bordesley Green is a vibrant, multi-cultural inner-city area, which, like many in the UK, suffers from unemployment and higher than average levels of poverty and crime. Perhaps predictably, it also suffers from the blight of litter and fly tipping.

Born in Poland, Tamara moved to the UK over a decade ago, made Birmingham her family home and thoroughly embraced life in the city. Open, articulate, warm and funny, she is passionate and vocal about personal responsibility and the value of community. No shrinking violet, she’s not afraid to stand up for what’s right – or to act on issues that are close to her heart. Somehow she manages to juggle volunteering with being a mum to a teenage daughter, studying an MA and working at a preschool nursery and at a secondary school – where, of course, they litter-pick every term: “one Year 9 boy said, ‘wow I never thought it could be so much fun’.”

This network of around 100 Muslim families coordinates educational activities in the area. Every member contributes to the group, whether helping to organise trips to museums or art galleries or passing on skills. The group gave Tamara the perfect platform to ask for litter-picking volunteers. Now many members come out every month, while others dip in and out, often helping to clear up areas they don’t actually live in.

Clearing up Imperial Road and beyond

Tamara’s group of mostly Muslim mums meets monthly on a Saturday morning and focuses their efforts on the Imperial Road area of Bordesley Green and Henry Barber Park, which is covered in carelessly discarded food wrappers, cigarette butts, crisp packets and bottles.

Some of the group are local, but many, including Tamara, travel to join in, bringing children, often in pushchairs. Kids aged between three and fifteen get stuck into the litter-picking, fuelled by hot chocolate and doughnuts. Once their work is done, the children can play in the park and the mums can socialise. It’s an enjoyable day out as well a useful one. And they can see a big difference already.

“When we used to park in front of the park, and got out of the car, our feet were crunching on rubbish! It’s not perfect now, but it’s definitely better. Fly tipping has stopped. We pick up the same amount of bags of litter but cover a much wider area.”

Meet up: Once a month

Maximum group size: 26 including children of all ages

Bags of rubbish collected so far: 100+ and counting…

CleanupUK has been instrumental

Tamara desperately wanted to set up a litter-picking group, but had no budget to buy the equipment she needed: litter-picking sticks, gloves, bin bags etc. She wrote to her local council about it but didn’t get any help. “I felt like giving up, but that didn’t feel right, so I tried just doing it by myself, but I believe in strength in numbers – that numbers of people give you the power to make change. I wanted to be part of a group.”

Then in December 2018, she saw a mum litter-picking with her children. She had equipment and a high vis jacket with “Beautiful Birmingham Project” on, so Tamara went to talk to her.The woman put her in touch with Yvonne Price from CleanupUK. “Suddenly it was so easy! She was so quick in replying – she replied straight away and told me about how CleanupUK can support me. She helped me in so many ways,” says Tamara. With Yvonne by her side, Tamara had the equipment, knowledge and confidence to start her group. And Yvonne still supports the group whenever she is needed.

A show of faith

An all-round original, Tamara is unusual in that she is a Polish Muslim. And in a first for CleanupUK she, along with many of her litter-picking group, chooses to cover her face with a niqab in public. She says this has had a positive effect in a community with diverse roots and cultures and where most people are Muslim:

“It makes us more approachable. People can talk to us without fear and feel more included. When they see people from the same faith, or from similar backgrounds, they think ‘they are not too much different.’ Some Muslims didn’t join in before because they didn’t think it was for them, but now they feel safer to do this new activity. They find this show of faith reassuring and start to think that litter-picking is for them.”

Yvonne says, “I knew Tamara would be an excellent group leader because she is so driven and active. We are a lot alike! We have had great feedback from the road, offers to use the loo, get hot water etc and the group is really engaged.”

We asked Tamara to talk about what drives her.

‘I am inspired by the environment; I’m made furious by the lack of consciousness of people who throw rubbish on the floor.

But also I believe in excellence. It sounds cheesy, but as a Muslim I believe in doing everything to the best of my ability. In Islam helping others is a big part of our religion. The area has quite a lot of Muslims and a lot of litter. We need to take responsibility. Faith motivates me, but also unity and community – unity is power and can change things.”

What are the benefits of litter picking?

“I’ve read research that says people feel safer if their environment is nice and clean and looks beautiful. Graffiti and litter makes crime higher. When people feel safer they contribute to that safety – and participate more in their community. Litter-picking helps people fight depression and anxiety. It’s good to be out and about. And litter-picking is a nice thing to do, it’s three hours of physical exercise, it’s sociable. We’re taking care of the community, being mindful. It all contributes to feeling good. And we act as a positive example to others. They think ‘I can do that too’.”

“When neighbours come up to us and thank us. I remember one time a man said, ‘I’ve tried doing this on my own, you‘ve inspired me to try again.’”

Should the council do more?

“I don’t want to criticise the UK, it is my home, but when I arrived from Poland I was shocked by the lack of bins. It’s not an excuse for littering, but more bins would help. I was raised to put rubbish in my bag or pocket until I found somewhere to put it, but change is difficult for people. I think the cost of bins would be worth it.”

What advice do you have?

“You can’t please everyone. One lady said it was a beautiful idea but will not change anything, nothing will ever change. I believe ‘if you do it and show people they will join you’ – that once you see a difference people start to do the right thing. If you see fly tipping and mess people think they may as well add to it; if it’s clean you don’t want to mess it up. People don’t litter in nice places.”

“There is always more to do. The park needs more groups – and more bins!” 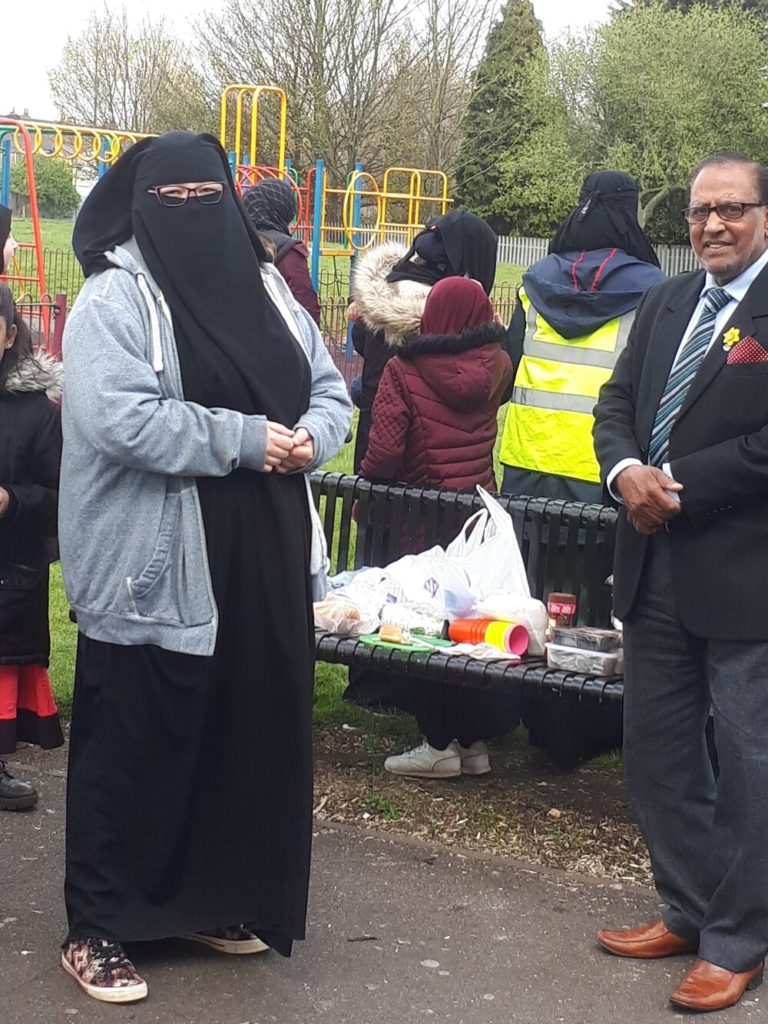