Wonderful Woolwich – a sleep disorder, a rapper and a secret garden…

Richard has been running the Wonderful Woolwich litter picking group since May 2014. The group meet once a month to clean the streets around Woolwich Docklands station. Already the area has been noticeably transformed. Over 60 bags of fast food wrappers, containers, cans and bottles were removed in just the first six months. The story behind this group is unusual, because Richard was gaining recognition for his individual efforts to scrub up Woolwich long before we became involved.

Richard suffers from a sleep disorder called Non 24 Hour Sleep Wake Syndrome. This means his body clock is essentially out of tune with the rest of the world. It has been compared to continuous jetlag and makes it impossible for Richard to work or study full time. Despite this debilitating condition, Richard is determined to lead a positive and productive life.

As part of this philosophy, Richard started litter picking in March 2012 on his own. He then took it upon himself to contact his local environmental coordinator at Greenwich council and persuade them to provide additional rubbish bins in the shopping district.

His efforts were recognised at the annual environmental champion’s reception in February 2014 and it was there he was introduced to CleanupUK and Wonderful Woolwich was formed. Richard says, “CleanupUK offered their experience, contacts and equipment including the litter pickers.”

With our support and some imaginative PR, the group has gone from strength to strength. They have raised awareness with a flyer drop to over 500 residents, social media campaigns and even a promotional video made by an American rapper. This attempt to engage support from local youth resulted in lots of support on Twitter.

Much more than rubbish

Since its formation, the group’s focus has broadened from litter picking to galvanising community spirit and improving all aspects of the environment; winning the support of local organisations, scouts and religious groups and strengthening links with the council.

Richard explains, “We managed to get the council to address two issues, which hadn’t been resolved for years. A drain grill was replaced and a tree which was causing structural damage to a local property has been removed.”

Other improvements are ongoing. For example, they are liaising with the council to turn local spaces into flowerbeds, to deter fly tipping and combat pollution from the roads.

The group has also turned its attention to a lost environmental treasure. They’ve discovered a long-forgotten ‘secret’ community garden hidden from passers by, but close to a residential tower block. They are currently working with the council to restore it for public use.

There is no doubt that the impact of this ambitious and proactive group will be appreciated for many years to come. And they are already making great strides in creating a safer more inviting environment for residents, combating social isolation and fear, as much as litter.

As Richard puts it, “It’s a small sense of the old community spirit which grows over time. People will stop and greet us, and let us know if they have seen any litter.” 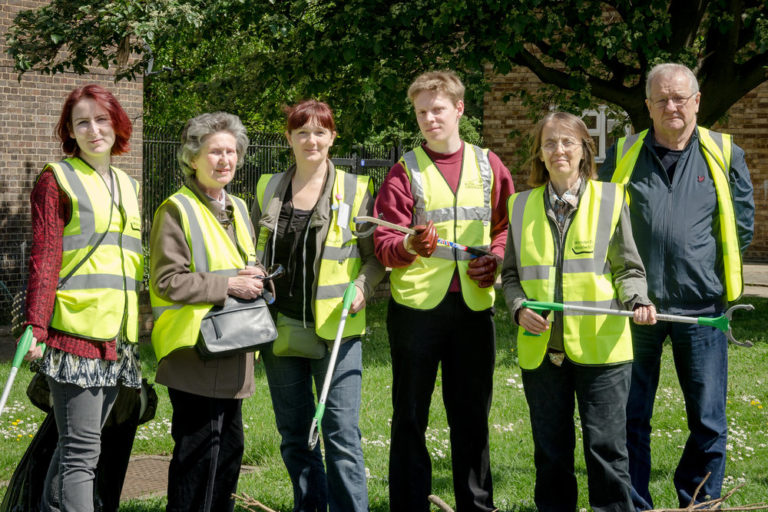