The Beach Wardens at Penarth are all unpaid volunteers who give up some of their free time to help keep Penarth beach free of litter. The group are independent of both the local town council and the county council but all Wardens are members of the Penarth Civic Society, which covers the general administration for the group, negotiates licences and other working relationships with beach owners and local authorities, and pays the necessary insurance premiums.

The Pernarth Beach Wardens will be participating in the 2013 Marine Conservation Society Beachwatch Big Weekend to provide data on the state of all parts of the beach we cover. 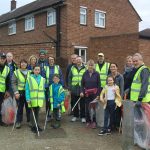 Prittle Brook Community Group
We are a group of volunteers who want to keep the Prittle Brook Greenway in Southend-on-Sea clean and tidy. We undertake regular litter picking sessions along the pathway. We cover the Leigh stretch once a month on a Wednesday morning and the Prittlewell/Westborough stretch once a month on a Saturday morning.
2064
12 years
View

Macclesfield Litterbusters
I have moved out of the area so no longer coordinating this group. If anyone would like to take it over please contact me. David This group does not exist any more but I cannot figure out how to delete it from the list!!!
25
11 years
View

MorrabGardens
We meet to pick up litter in Morrab Gardens on the 1st Sunday of every month.
60
4 years
View

The Pickup Artists
This group was set up to encourage individuals to litter pick in their own streets. We now meet in groups and attend organised events to spread the word.
0
3 years
View

Windmill Hill Green Party
After conducting a survey in the area, litter was mentioned as a menace. The Green Party in Windmill Hill would like to organise a litter picking day on Saturday 13th April 2019.
0
2 years
View

Brighter Uckfield Campaign (BUC Up)
The Group operates under the aegis of the Town Council. Every Sunday morning, at 9.00, a small band of volunteers (open to anyone to attend) meets at the Civic Centre to conduct a 'swift-pick' in the worst-affected areas (finishing at about 11.00). The Campaign has moved onto taking small patches of public land in the town and overseeing planting out and maintenance. The town's annual beautiful gardens competition is organised by the Group. The Group joins the annual clear-up of the River Uck that flows through the town. Weeding pavements and cutting back undergrowth are also tasks that are taken on. Most of this work is concentrated on the town centre, but a network of 'litter pickers' is being gradually established on the estates around the town. Volunteers are provided with a hi-vi vest, a litter picking stick, gloves and refuse sacks - and we even have wheeled trolleys to take round with you to deal with the large amounts of litter on a Sunday morning. The Campaign has its own (Don't be a) "Mucky Duck" logo.
336
13 years
View

Nomanslanders
We collect litter in a relatively informal way in the area around Nomansland Common.
0
13 years
View

Red Lodge Parish Litter Pickers
Red Lodge Parish Litter Pickers are a group which formed after Villagers suggested that the Parish should start a group to tackle the littering in the Village. Councillor Ian Thompson has organised the event with support from the Parish Council, it is to make the Village a more enjoyable place to live and bring the Community together to work as a team.
0
51 years
View

The litter Pickers of north bolton
We try to be positive about our work We litter pick as a group every Sunday, we also support lots of lone Pickers that go out during the week to litter pick . We tackle grot spots and support new litter picking groups in other areas of bolton
3766
6 years
View

Harman's Cross About Litter/Worth Picking Up
We are part of the Litter-Free Purbeck Group. Our aim is to tackle the litter problem by engaging the broader community to raise awareness of what can be done, not only by litter-picking activities, but also to deal with the varous sources of the problem at corporate and individual levels.
129
5 years
View