Hackenthorpe Litter Pickers
Friendly Local residents who care about where they live. We meet Fridays and Saturdays according to the time of year. Check our Facebook page for latest times.
0
3 years
View

Durham Coast
Durham's coastline is unique. Nowhere else in Britain has such a wonderful display of magnesian limestone coastal grasslands supporting a vast array of wildflowers and insects. Most of the coast is now designated as a National Nature Reserve with several Sites of Special Scientific Interest. The England Coast Path runs through the area and is becoming evermore popular with visitors. The beaches are improving after the impact of coal mining and coastal towns such as Seaham have seen a dramatic increase in tourism. The beaches still suffer from litter and are regularly cleaned by groups of keen volunteers. If you would like to join in please see the upcoming event section for more details. We can support groups who want to carry out their own event by supplying equipment (bags, litterpickers, gloves etc) and organising the safe collection and disposal of the rubbish bags after the event. Please pass this information on to anyone you think may be interested.
520
9 years
View

Debenhamlitterpickers
This group is in a picturesque Suffolk village, with excellent contractors coming here frequently collecting 4 binfuls of litter a week - but still the litter comes!! Time for a Spring clean and community action!
217
6 years
View 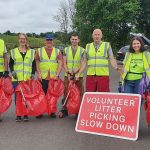 Northants Litter Wombles
We cover the whole of Northamptonshire, at July 2021 we have 2600+members and have collected 22,000+ bags since Feb 2021. Please see our Facebook page for details on group picks etc
22567
8 months
View

Collie Collections
Currently most of the work is done by my Border Collie who collects crisp and other wrappers and plastic bottles. She then finds the nearest waste bin and puts the litter in it. She has been doing this for the past 5 years.
27
10 years
View